At first sight nothing might seem more reasonable than the new move among Catholic schools in Australia (and other places and doubtless soon many non Catholic schools as in Sweden ) to introduce gender neutral language around God whom it’s assumed  should be easier by this to relate to. To be dropped are such words as “Father” “Son” and “Lord”. It seems to be assumed, rather in line with radical feminist Mary Daly’s once groundbreaking Beyond God the Father, that such words bespeak only the patriarchy.

Since the bible anyway nowhere categorically states that God is male – there are even places in the OT where God is compared to a mother, nurse or wife, – the new emphasis would hardly strike anyone as an inappropriate adjustment. It can still seem reasonable even though, as Catholic journalist Ann Widdecombe insisted on TV, Jesus always referred to God as his Father  so that should be good enough for us. Even so, we have to consider that Jesus also maintains, God is most essentially Spirit (Joh 4:24). And Spirit is, and is reflected through, certain energies more personal than abstract. Disposing of common names and terms for God risks leaving us with only the impersonal deity of the philosophers.

I suspect that what is going on has more ramifications than meets the eye, and especially for Catholics these may be linked to the Pope’s surprising swerve, signed into being last February with Islam’s leading imam, towards a new ecumenism of faiths with special and surprising reference to the often hostile Islam.  (See article on this site “St Malachy’s Last Pope” https://wp.me/p4kNWg-oM )

Before going further, let’s consider three problematic biblical verses for the project of dropping such key, familiar words as “Father”, “Son”, and “Lord”.

“….and every tongue should confess that Christ Jesus is Lord to the glory of God the Father” (Phil 2:11).

These verses accord the “patriarchal”, non PC words a special spiritual status in the realm of belief;  and undeniably, if you aim for a very strong Chrislam union of faiths, Christianity would need to downplay or cancel out especially the third quote because the Koran (Sura 23:91)  is dogmatic that “God has begotten no Son”. Indeed for Islam anything Trinitarian is as good as pagan and polytheistic.

What is Christianity trying to say with and through its “patriarchal” words attached to a religion for whom God is Spirit?

I suggest the matter is a bit confused by the fact the whole of the West (including somewhat St Paul) until the Enlightenment and modern science, had what Thomas Lacqueur would call a one-sex theory rather than a two sex view of reality. Women, like children, were regarded as less and below men but in some sense the same sex; the understanding of human relating was hierarchal throughout. Had there been a two sex theory (as we implicitly assume today) it might  have been possible to speak in terms of something more like a continually interacting, equal but different energies in the style of Yin/Yang.

This doesn’t sound like it would be much help to a Christian view of reality, but in fact it helps quite  a lot and tidies up what might not seem to fit, everything from the Spirit impregnating the waters at creation to Jesus declaring himself subordinate to the Father in John’s gospel and not being the fully, mathematically equal being that Augustinian and western philosophy has made him.

Where sex and gender are  concerned, there is of course a spectrum which contains a fair amount of difference so that male and female display a variety of styles and degrees in expression of their masculinity and femininity; but the core/archetypal energies are, and always will be, basically more or less yang active first and yin receptive. Though God is Spirit and male and female only reflect, imitate or symbolize transcendent divine energies, the fact remains that Yang more nearly “begins” is “first” or creates just as the male impregnates the female, starting a process the female brings to term.

Accordingly, to refuse to admit God is “the Father/Creator” or to think of Jesus as “Lord” can amount to denying God orders things and represents order rather than chaos. The created needs to acknowledge the Creator short of precisely chaos – in contemporary life a fair deal of mental disturbance and crime is associated with males raised without fathers. Though historically women have too often suffered from male domination, the fact seems to be that many men themselves crave some degree of domination by other males. God may be imagined as anything from pure light to a figure enthroned, but a deity without the quality  of an initiating power and authority is no deity, or not one that spirit and soul can ever quite adequately interact with. And it belongs to religion’s duties to help keep the doors to spiritual communication open. Which is something PC revisions may not psychologically and spiritually assist.

A strong case for Christian understanding of the Trinity, especially against the background of our two sex apprehension of reality is as follows. It is not as per Augustinian, western  and less than strictly biblical notions of a total, mathematical equality of the persons, but rather a complementary union and semi-subordination in harmony with statements like “The Father is greater than I” (Joh 14:28). 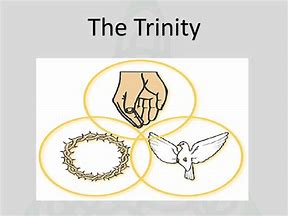 Jesus and the Holy Spirit, both as the Eastern churches even split from the West to affirm, proceed or emanate from the bosom of the Father (who can also be like the Mother) who contains both energies analogous to male and female. (The West makes the Spirit proceed from the Father and the Son, which is most unlikely, not least in view of how much Jesus waits upon the Spirit!).  Son  and Spirit are however  the fundamental  ying/yang who together help materialize things “below” the level of the hidden and transcendent deity of which  however they are part. Christ and Spirit  in their different ways are both divine mediators of  the Godhead who being as immaculate as humanity is imperfect, cannot be directly approached or experienced in fullness.

While it is feminist trendy to propose the Spirit is feminine, the Holy Spirit, as Jesus insists (Joh 16:23),  is “he”, essentially male in terms of energy (like the Spirit who impregnates the waters at creation). It is Jesus –  who will do nothing until the father first wills or the Spirit moves him –  who is effectively the female principle hidden in plain view. He is self described as the mother hen who would like to protect Jerusalem and the world.(Matt 23:37). Practically and to human view obviously Jesus is male, the Logos or Word of God. But he is also called by St Paul the Sophia, the Wisdom of God which is feminine. Jesus is a face of, and the principle of “change” within the essentially unchanging deity; he is deity’s visibility and invisibility.  One needs to realize this, in effect a mystical realization in its own right, but as Jesus remarked, “Wisdom  is justified of her children”  (Luk 7:35).

All this and more would be much easier to absorb given only a few mystical and esoteric understandings that Christianity is by and large determined to pass over and dismiss. It cannot be adequately covered here.

However…sufficient to stress that though the historic and sometimes present misuse of terms like “Father”, “Son” and “Lord” can be acknowledged, any easy dismissal of their current usage is still a danger to Christian spirituality.  What has been to many the unexpected Catholic role in this radical change belongs to a wider problem, namely that Catholicism is at heart the least Judaeo-Christian and biblical of the branches of Christianity. It has too often, as now, inclined to impersonalize God, substituting relation to deity for a cult of saints, angels and especially Mary. The latter has received an abundance of titles and roles drawn straight out of especially biblical Proverbs and the Jewish apocrypha where they apply to the mysterious figure of Wisdom. Christians understand this figure to be the Jewish Messiah, Jesus, not any “Queen of Heaven”, a title that especially the prophet Jeremiah denies the right of existence to.

At a certain level, mystically, Catholicism is all of a potential  world faith though scarcely Christian with it but Neo-Platonic in the style of Plotinus.  This thinker would shape Christian mysticism from  St Augustine onwards right up to the popular Thomas Merton who from his many impersonal, as good as non-theistic realizations, easily slipped into the position of virtual or actual Buddhist convert. Questions can well be asked what Catholicism and its controversial Pope is doing and preparing behind its various adjustments to contemporary trends  and realities.